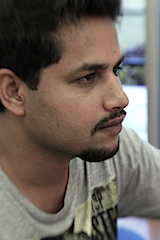 ‘My Own Private Bollywood’ is done following me while I work on my debut hindi feature film GAON.

GAON is inspired by the true story of my village in Jharkhand, India. Once in this remote and isolated community, villagers coexisted like members of a large extended family where they maintained a unique way of life—mellow and harmonious, celebratory and united. With the passage of time and the evolution of modernity, government and private agencies alike made inroads into this simple community, throwing open the floodgates of drastic change which would come to erode the very fabric of village society.

With the arrival of new institutions such as government schools, a police force, and a banking system, money began pouring in from this wave of development projects. The village entered a transformatory phase, coming to possess many of the same amenities found in modern urban centers around the world. Citizens disengaged from one another, growing progressively private, limiting interaction, and keeping to themselves and their families. The agricultural way of life and the traditional spirit of self-sufficiency were shunned in favor of reliance on government support or the earnings of a single family member working in the city.

With such pervasive change, the very nature of what the village once was seems to have vanished. Regrettably, so many villages across India share the same story of erosion.

This film is an attempt to pack 200 years of India’s history into two hours of cinema. Herein, The Village called Bharatgaon, is itself the protagonist whose character unrecognizably transforms given events transpiring around and in it. Bharatgaon and lead male character Bharat serve as metaphors for the state of India, though representing diametrically opposed interpretations while simultaneously residing within one nation – competing, confronting, and falling for each other.

‘My Own Private Bollywood’ is quite a personal film in a way!